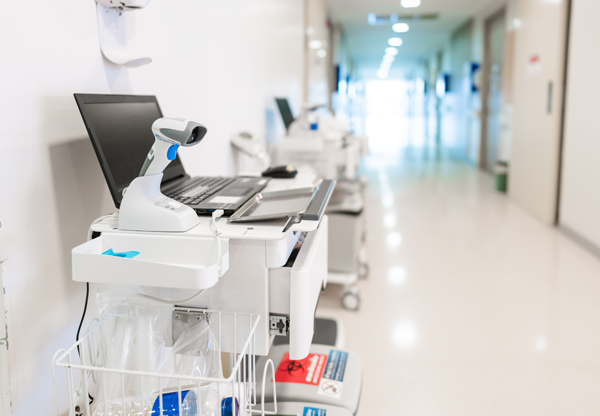 Mobile powered workstations have been used in hospital settings since 2001, when the first mobile workstations were deployed in a Pennsylvania hospital. But prior to 2012, most medical workstations relied on Sealed Lead Acid (SLA) batteries. Fast forward to 2020, medical workstations continue to mobilize many devices, and the underlying power architecture has converged around two competing power configurations – in-base power and swappable battery systems.

Most mobile workstations offer 120 or 240 VAC power to the user devices installed on workstations. An in-base power architecture typically consists of two major subsystems – a 12 Volt, 40 (+/- 10) Ahr, 480 Whr, U1 format Li-ion battery and a 100 – 150 Watt inverter/charger. The inverter/charger performs several functions, including AC/DC power conversion, battery charging, DC/AC power inversion, an Internet of Things (IOT) processor, a communications (SMBus, CANBus) transceiver, and electronics to drive a Remote User Interface (RUI) or Fuel Gauge to inform the user about system performance. Figure B provides an interior view of a medical workstation with in-base power subsystems – the battery and inverter/charger. An in-base power architecture has the following characteristics:

There are more components to a swappable battery system than an in-base battery architecture. From a block diagram perspective, the system has at least three distinct subsystems; the battery, the battery charger, and the battery receiver/controller mounted on the workstation. The battery receiver/controller can perform several functions, including AC/DC power conversion, battery charging, DC/AC power inversion, Internet of Things (IoT) processor, WiFi transceiver, a small reserve battery, and electronics to drive a Remote User Interface (RUI) or Fuel Gauge. A fully integrated controller/receiver will have all these functions.

Hot-swapping a battery refers to the removal of a depleted battery and insertion of a charged battery without shutting down the workstation’s electronics and IT devices. This useful feature enables a mobile workstation to supply uninterrupted power, rather than docking a workstation for a battery recharge or shutting down the workstation’s electronics when the batteries are swapped. Hot-swapping can be achieved with two swappable batteries installed into a common receiver/controller, or developing a single-bay swappable battery system with a small reserve battery embedded in the receiver/controller. Most modern workstations support hot-swapping, as the alternative is an interruption of power delivery to the workstation, which is disruptive to the user’s devices.

Characteristics of a swappable battery system are:

Integration with the Workstation

If the swappable battery system is used to power a medical workstation, infection control and agency certifications should be considered. Infection control is minimized by using selective PC/ABS materials for the battery and receiver/controller housings. Antimicrobial additives, such as Microban, can be added to the plastic resin to keep plastic parts cleaner by inhibiting the growth of bacteria, mold and mildew. Tight seams can be implemented to minimize microbial growth within those crevices. The industrial design can be optimized so all components are easy to clean. The Ingress Protection (IP) rating should be high enough to ensure the components can be cleaned with antimicrobial cleaning solutions and not penetrate the interior or erode the seals/contacts of the battery.

Most mobile medical workstations have UL and/or CE approvals to ensure safe and non-intrusive operation of their product within a hospital setting. For the components of a hot swappable battery system, this typically dictates that the battery has the following regulatory approvals – UN 38.3, IEC 62133 and UL 2054. Additionally, the receiver/controller typically has UL 60601 3rd/4th edition, as well as a CE mark for shipment into the EU.

When In-base power and swappable batteries were introduced, OEM’s offered either a LFP or NMC version of their products. Over time, the medical workstation market gravitated towards the LFP chemistry for several reasons:

Currently, despite the fact that LFP chemistry has a higher cost per Whr than NMC, almost all batteries powering workstations utilize LFP chemistry. LFP Batteries demonstrate superior total cost of ownership over Sealed Lead Acid (SLA) and NMC batteries. The upfront cost is higher, but over the lifetime of the workstation, the total cost is lower.

Li-ion Cells are Growing – When Does it Stop? Green Cubes is a great company, great engineers, great product. That’s been kind of my number one go to [lithium] battery.

The thing I like about Green Cubes is that they have other lines of business outside of material handling batteries, they have been in the lithium world for a long time. I can trust they will likely stay in business

Green Cubes [differentiates] on its capability to custom design for things like the hardware, the firmware, and inverters. They also have economies of scale because they make battery systems for things like forklifts.

I am doing some work with them right now. We’re learning their products, and looking at demos. They have good people. They seem like they know the technology well – they say they’re a technology company. I like that they’ve been in the lithium business a long time. I can trust they will likely stay in business.

Green Cubes Technology would be my go-to for lithium applications.

I’ve told my friends at Green Cubes, I don’t plan on going anywhere. I believe in loyalty.